BUC’s Centre for Global Affairs is an independent research, analysis, and consulting think tank in Egypt. First of its kind, it aims to present world affairs from a non-partisan and uniquely Egyptian perspective.

The BUC’s Centre for Global Affairs vision is to present an unbiased, socially responsible body of research that fosters dialogue and contributes to decision and policy-making, both locally and globally.

Consult on and Contribute to Policy and Decision Making

The Centre aims to have a notable impact through unbiased and dependable research that addresses current issues and predicts possible crises. Our work aims to provide governments, policymakers, as well as the private sectors with sufficient information to build a secure and prosperous world.

The Centre aims to prepare the next generation of experts and leaders by equipping them with the analytical and problem-solving skills necessary to influence future policies on the most pressing political issues.

The Centre strives to raise political awareness on local and international levels by fostering dialogue and debates on all issues of Egyptian and Global Affairs.

The Centre works on fostering an open-minded environment that will enable our experts to produce ground-breaking and strategically important research for a peaceful and sustainable future.

Senior Advisor to the Board of Trustees

A decorated military veteran, Major General Mohamed Elkeshky is a seasoned leader and diplomat with extensive experience in military strategy and foreign relations. He capped his venerable military career in the Egyptian Army as the Deputy Defense Minister of External Affairs. MG Elkeshky complemented his military career by completing military studies through acquiring a master’s degree in National Security Strategy from the National Defense University (NDU).

Throughout his career, MG Elkeshky served in several distinguished positions, most prominently as the Commander of the Artillery Military Zone, Defense Attaché to the United States and Canada, and Deputy Defense Attaché in London.  His career included critical posts such as the command of a battalion during the Gulf War (1991) and his appointment as the head of the Military Attaché Association in Washington DC, which included all nations represented in the United States.

MG Elkeshky’s pivotal role in foreign relations and the military was recognized both internationally and locally. Awarded the Legion of Merit from the President of the United States (2013), MG Elkeshky is the only Egyptian foreign national ever awarded this honor. He also received the Order of the Republic award from the Egyptian government as well as many other awards. 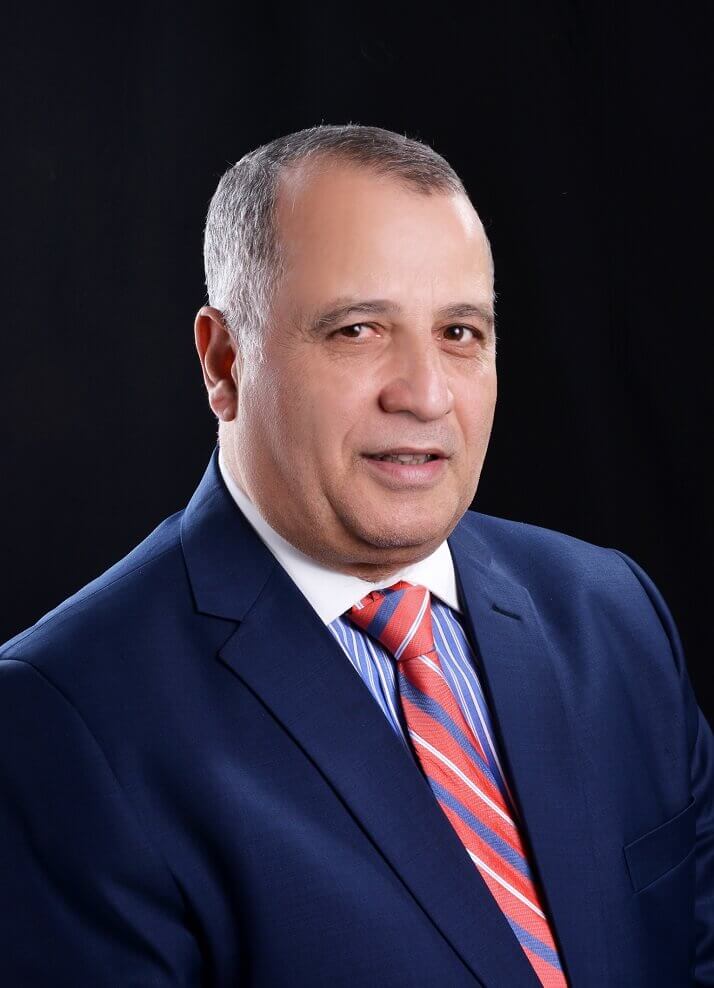 Ambassador Galal is a former career diplomat with over 38 years of experience in international relations and global affairs, with a special interest in technical cooperation and human resource development. Ambassador Galal was the Assistant Foreign Minister for Judicial Affairs as well as Secretary-General for the Egyptian Fund for Technical Cooperation with Africa. She represented Egypt in numerous postings including Ambassador to Singapore, Consul General to Australia in Melbourne, and Deputy Head of Mission in London as well as numerous international conferences. 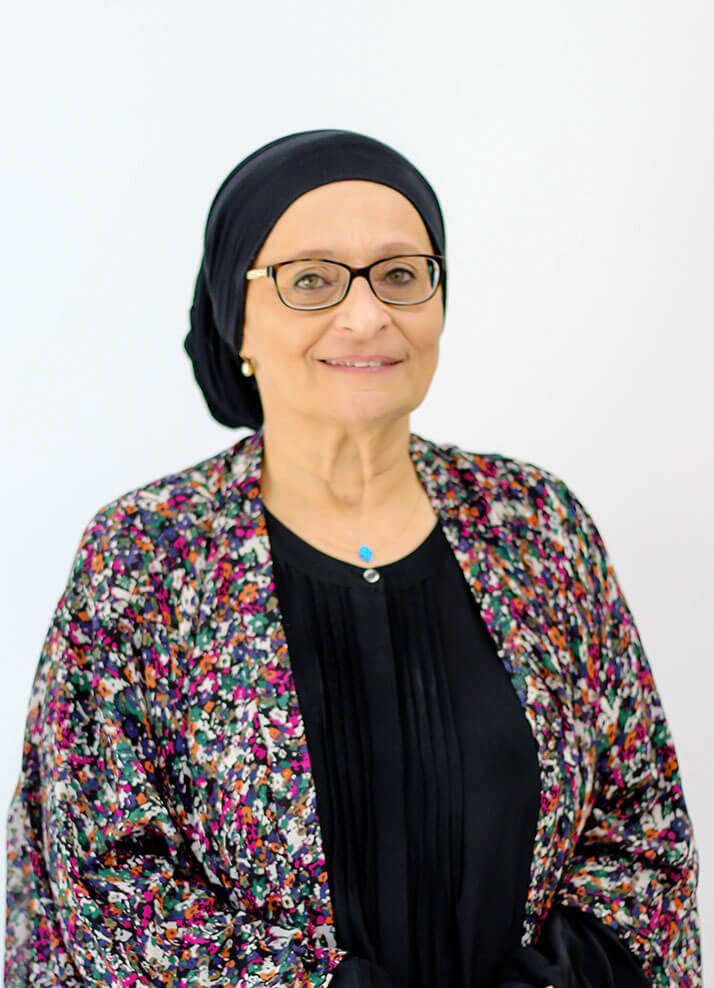 Tarek Abdelraouf graduated with a Masters of Arts in Global Affairs with a concentration in Global Risk and Corporate Responsibility from Florida International University’s Steven J. Green School of International and Public Affairs (SIPA).

During his time in the United States of America, Tarek spent his undergraduate and graduate years working in different capacities with multiple organizations such as The International Rescue Committee, The Impact Economy Foundation, and Big Brothers Big Sisters of Miami; he was also a board member for the United Nations Association of Miami chapter.

Tarek’s research interests are in: The Sustainable Development Goals, Impact Economy, Education, Sustainability, and Public policy, among others. 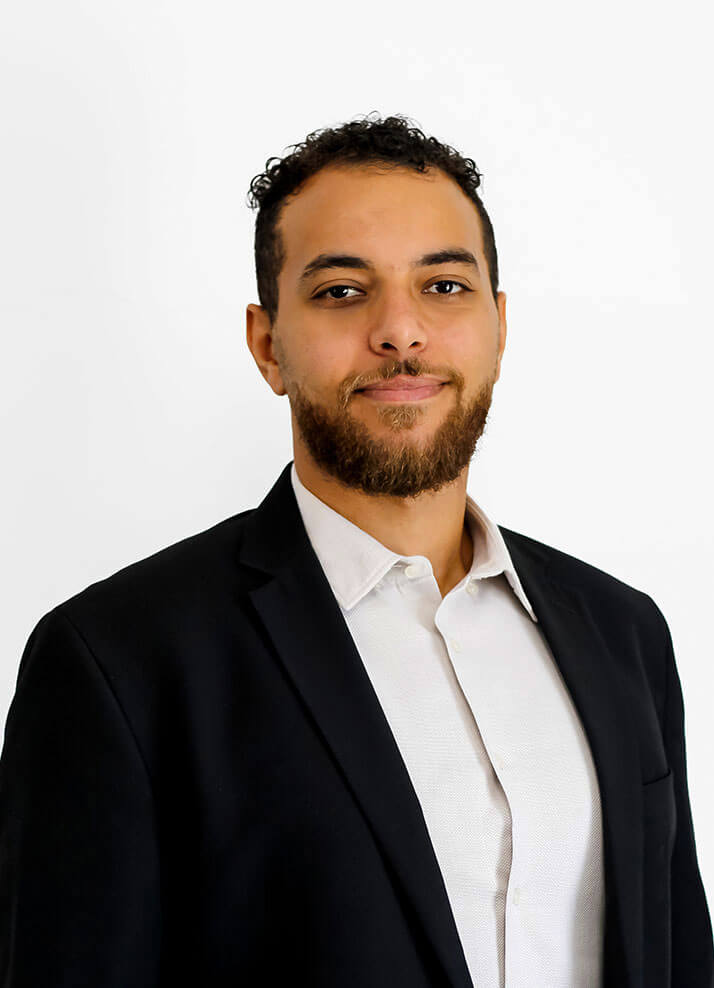 Jouna Khaldoun graduated from the American University in Cairo (AUC) with a Bachelor’s degree in Political Science, a double specialization in Middle East Politics and International Relations, and a Minor in History.  As a fresh graduate, her career started as an Executive Manager in a LegalTech startup “Hekouky” to facilitate legal assistance. She also took part in an internship program by UNICEF Egypt where she conducted research and report-writing. She began her journey at the BUC Centre for Global Affairs as a research intern for 3 months and is now a Junior Researcher at the Centre. 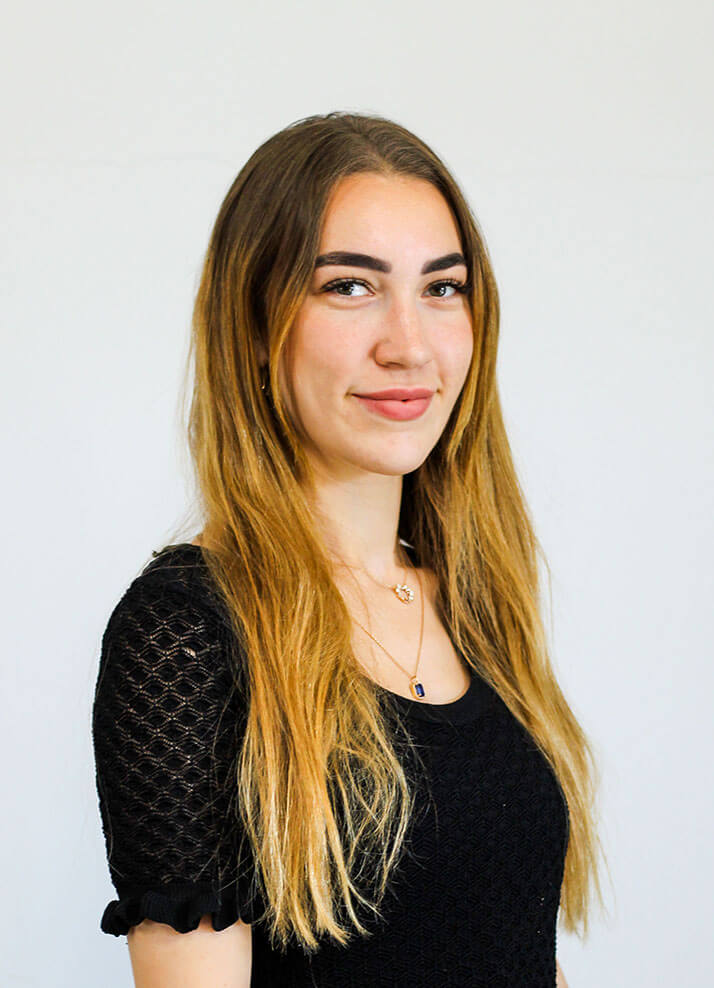 Adham Shebl graduated with a Masters of Arts in Political Science with a specialization of International Relations from the American University in Cairo (AUC).

After his graduation, Adham was a post-MA fellow at AUC’s “Extimacies: Critical Theory from the Global South”. During the fellowship he participated in colloquiums and workshops studying the works of Jacques Lacan. After the fellowship, Adham was a credit-risk analyst at GlobalCorp. During his time as an analyst, he was tasked with conducting industry analysis and preparing credit packages for prospective clients. 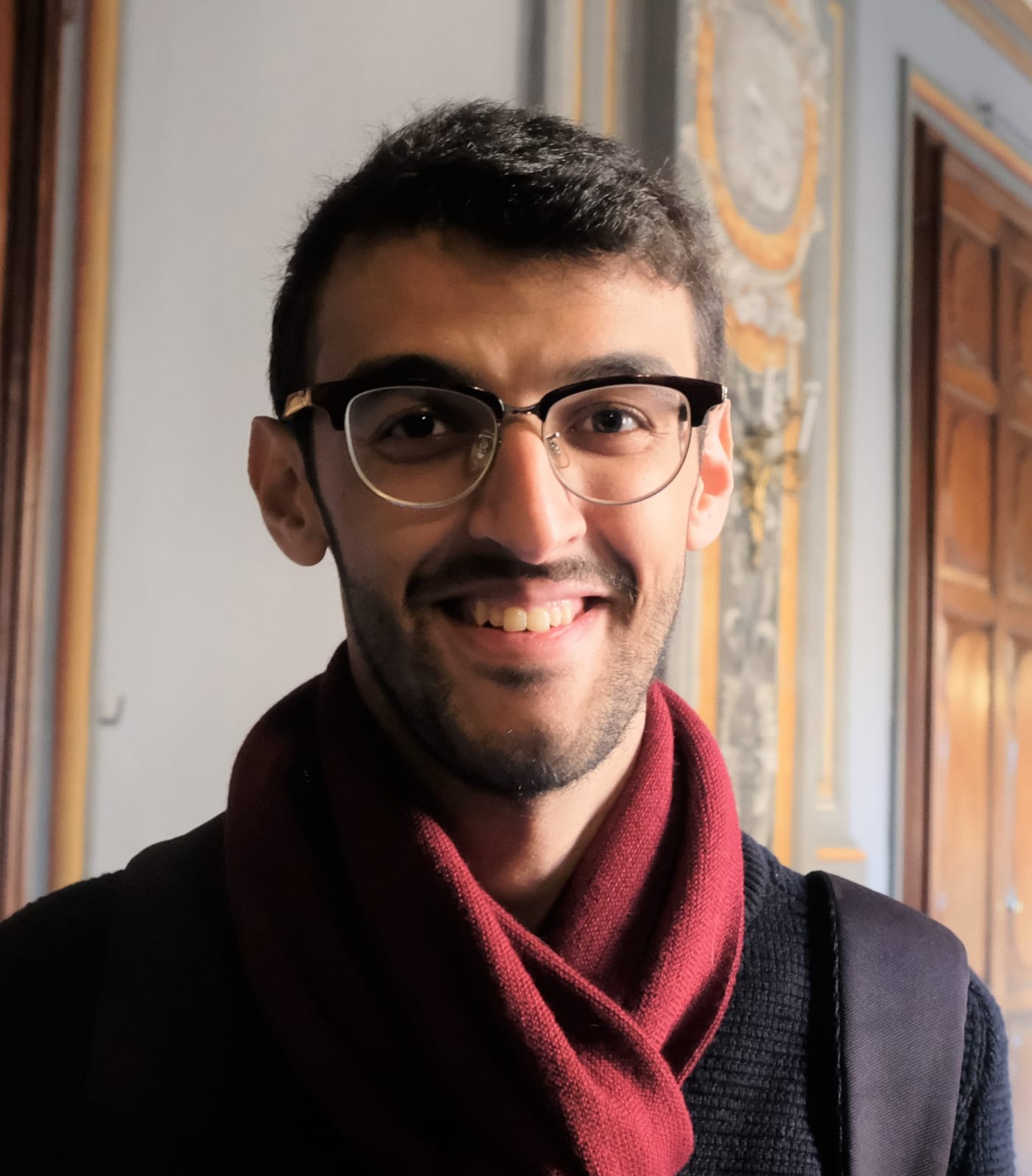 Social media has become a fixed component in the lives of Egyptians. Over the past decade and half, it has had a profound impact on Egyptian society and politics. In its evolution, it has proved to be a force for positive change as well as a potential threat to be exploited by nefarious actors. Read more about the dangers posed by social media and the possible frameworks for resolving these dangers in Seif Hendy’s latest publication – “Social Media and Egyptian National Security.”
View Publication

Thawing Capital Strikes: Private Investments in Egypt and the State.

Egyptian private investment’s role in the Egyptian economy is declining. Such a development results in the Egyptian public sector being forced to increase its investment spending, which removes funds from social safety nets and public services. The government is aware of this problem and seeks to encourage the rise of private investments in the country. However, there seems to be a missing link between the investors, manufacturers, and the government. Read more about the challenges and possible solutions for developing official communication channels between all necessary parties in Adham Shebl’s latest publication – “Thawing Capital Strikes: Private Investments in Egypt and the State.”
View Publication

Education serves as one of the most essential building blocks for sustained growth and development within any given society. Egypt’s education system, as of 2019, ranked 134 out of 144 according to indicators issued by the World Economic Forum. This paper analyzes the underlying factors that hinder education in Egypt. Additionally, this paper looks at current policies that seek to improve that situation and proposes future pathways of developing the Egyptian education system. Read more about the challenges and future of Egypt’s education system in Jouna Khaloun’s latest publication – “Public Education in Egypt.”
View Publication

The Slippery Slope of the Egyptian Middle Class

How is the Egyptian middle class faring in its plight? A question inevitably raised in the face of the culminating economic challenges faced by the Egyptian economy nowadays. Strong empirical evidence categorizes the middle class as the primary measure for successful economic reform. If the enacted reforms preserve this class, it is an indicator of a successful trajectory. To find out more on how subsidy cuts, currency flotation, progressive income tax and high inflation have sturdily hit an already hollowed-out middle-class, read Jouna Khaldoun’s paper titled “The Slippery Slope of the Egyptian Middle Class”.
View Publication

The Russian invasion of Ukraine shows us the key elements required to de-escalate a military conflict. Concessions and compromises are the keystones of negotiations between equal parties. However, if one of the parties perceives the relationship to be unequal then negotiations turn to demands and dialogue halts. Read more about the ongoing invasion and pathways of possible de-escalation or further intensification in Adham Shebl’s paper: “The Kievan Dialogue: Thucydides in Eastern Europe.”
View Publication

Egypt serves as a bridge between Africa, Asia and Europe, its location sets it in a prime position that offers tremendous potential for the country’s economy and tourism sectors. Yet, Egypt faces multiple security hurdles that can impact its way forward. Read more about the challenges facing Egypt in Tarek Abdelraouf’s latest publication – “Beyond Borders: Analyzing Egypts Security Threats”
View Publication

A Libyan Model for Libyan State-Building

10 years after the fall of Gadhafi, Libya still remains as fractured as ever. Although international efforts pushed for parliamentary and presidential elections last December, debates around whether Libya is ready or not, constitutes a point of contention. Libya is still facing abounding security, institutional and state-building challenges, thus why the electoral process has been delayed until further notice. Nonetheless, there are serious interrogations as to whether the elections provide and sustain what Libya needs. To find out more about how the Libyan crisis does not require a “western reform agenda” but rather calls for more Libyan-tailored solutions, check out Jouna Khaldoun’s policy paper.
View Publication

When Governments Fail People: The Weaponization of Antisemitism

Zionism and antisemitism have, since the coining of their names, been what many call strange bedfellows. The conflation between the terms, specifically antisemitism and anti-zionism, and their constant use and abuse in politics, have created an environment where ‘antisemitism’ has been weaponized; often to the point of being detrimental to everyone. Read more about the blending of Semitism and Zionism in Farah Rasmi’s article: When Governments Fail People: The Weaponization of Antisemitism.
View Publication

Worldwide, the energy sector is the biggest emitter of carbon emissions and greenhouse gases. The sector is also perfectly positioned for a transformational era into renewable energy. Given Egypt’s geographical location, the country is able to utilize many of its natural resources, become a renewable energy hub in the region, and lower its dependency on fossil fuels. Read more about global energy consumption and, how Egypt can develop its energy generation in Tarek Abdelraouf’s most recent article: Putting the Earth First: The Case for Renewable Energy Transition.
View Publication

The system is down: understanding corruption

Corruption worldwide has been a contentious matter. From defining the term to enacting policies to tackle the issue, the many facets of corruption have policy makers debating the best course of action to resolve the global issue. Find out more about corruption and the role of policy makers in its eradication, in Farah Rasmis paper “The system is down: understanding corruption”
View Publication